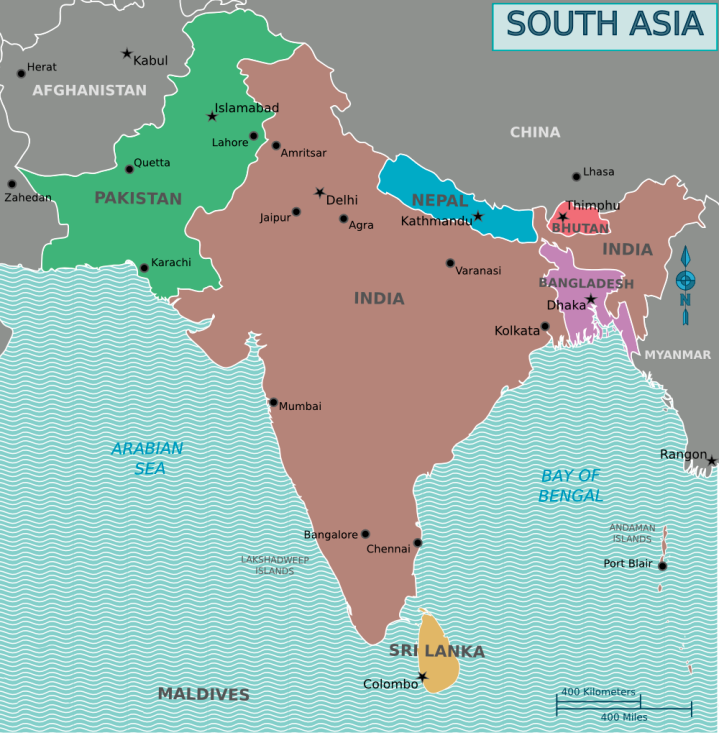 NOTE: This post will be the first in a series regarding the ‘South Asia’ theme. Keep checking back for additional posts and information throughout the 2016-2017 academic year!

South Asia’s history is long, diverse and rich. The Indus Valley civilization is considered one of the first major civilizations in the subcontinent. The land was also home to the Mongolian Empire, the Mughal Empire and finally the formal establishment of the British Raj from 1857 onwards. Since the end of the Second World War and the partition of the Raj in 1947, the United States and the Soviet Union constructed ‘South Asia’ as ‘Third World’ space for geopolitical influence for much of cold war period but also in the post-cold war period with the nuclear states and ‘war on terror’.

Though the Indian subcontinent encompasses over 1.7 billion people, our presentation will focus on the contemporary geographic countries of Pakistan, India, Bangladesh and Sri Lanka. The themes of social ‘progress’ and ‘development’ are selected in part to limit the scope of topics which are endless and allow a tighter framework for the conference series to work from and within.

The history of the region uncovers far more similarities than differences between the peoples. The use of critical studies is utilized to move beyond traditional political or historical studies of the region such as the nation state, democracy or religion. Such constructions downplay and construe the experiences of the living in and from the region from a transnational and interregional perspective. The use of critical studies is not to critique the ‘wrongs’ as moral claims but utilize interdisciplinary critical theory and alternative modes of thinking to engage with the limitations of our own thinking of the region and its peoples. Critical theory for example acknowledges the lack of absolute truth and the limitations of how much one can know. It is from this thought this conference also operates. The non-exhaustive list of academics to draw from includes Michel Foucault, Gayatri Spivak, Dipesh Chakrabarty, Derek Gregory, Anupama Rao, Gayatri Gopinath, Ayesha Jalal and Himani Bannerji among many others.

Ultimately, INDePth aims to raise alternative thinking in ‘reading’ and ‘viewing’ the subcontinent through critical lens while acknowledging the limitations of critical approaches themselves.

INDePth (Interrogating Notions of Development and Progress) is an award-winning annual student-run conference hosted by the Asian Institute at the University of Toronto. Our goal is to enable students from a multitude of backgrounds and disciplines work together to challenge, investigate, and better understand economic and social developments in the regional context of Asia. - INDePth Conference 2018 View all posts by indepthconference